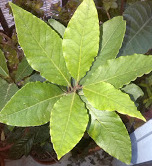 The laurel ( laurus nobilis) is a plant much used in magic and healing. Laurel has many qualities: purification, wealth, success, protection, strengthens the quality prophetic. It is burned before a ritual, pulverized, to clean up space, to ward off negativity.
It is also used as a talisman to attract wealth, just take three sprigs of laurel and tie them together and hang them in home. For the Roman laurel was a symbol of victory, was worn by the gladiators who survived the wars. A sprig of laurel is used to disperse water consecrated and blessed in holy places, magical or to form the magic circle. A leaf under the pillow or burn the leaves before falling asleep induces prophetic dreams and clairvojance. To fight lack magic rituals we use to burn laurel joined the sandal. Laurel berries are used in rituals for work and success and attract money. Also for purifying baths are used bay leaves dipped in  hot water. On healing is used to treat wounds, against bones and muscle hills , flu, bronchitis. The bay has a lot of iron and minerals useful to the strengthening of the immune system, the blood and the sight.

The Greeks thought that the leaves had the power to transmit the gift of divination, to remove the lower spirits and black magic and contagious diseases. At Delphi, the seat of Apollo’s oracle, the priestesses chewed or burned bay leaves to establish communication with the Gods and slept on layers of its twigs to encourage premonitory dreams.
In the myth told by Ovid in his Metamorphoses, the nymph Daphne, whose name means “laurel” (laurel), was the first love of the god Apollo. The young woman, in order to escape the courtship of the god, had her mother Gea transformed into a laurel plant. The god, now impotent, decided to honor this plant making it evergreen and to make it sacred to him. From that moment on, men would have used it as a symbol of glory, to be placed on the leader of the best, heroes, geniuses and sages, capable of thrilling enterprises.
The bay berries are harvested in autumn and have antioxidant and anti-inflammatory properties. Reduced powder can be used for analgesic teas, or as a decoction they help in relieving arthritis and respiratory tract and skin diseases. In order to cure rheumatism in ancient times, the UNGUINT LAURINO was prepared: the berries crushed in oil were left to macerate for a month and after one month they flopped and the oil was used lukewarm to massage the parts of the body affected by rheumatism. Some drops of this oil with the addition of some leaves in the warm water of the bath provide an aromatic BATH  FOR PURIFYING AND CALMING.

Easy to produce the LAUREL POWDER for rituals:
In a marble or stone mortar, crush a perfectly dried fistful of berries until they are pulverized, then place in an airtight glass jar.
You can use this powder mixing it with honey as well as effective ointment against the flu, cough, cold, fever. Just spread it on the breast of the sick.

INFUSION: 5 bay leaves, 1 cup of water
Pour the bay leaf into boiling water and turn off the heat. leave to infuse for 10 min. Filter the infusion and drink it to aid digestion, to help expel gas from the gastro-intestinal tract, fight stomach pains and flu states.

A recipe that is often also prepared to help colds and as a digestive is the LIQUOR OF LAUREL:
Ingredients:
700g of bay berries OR about 100 large leaves
1 liter of pure alcohol
1 liter of water
400g of caster sugar
If you use the leaves should be fresh and washed and dried with a cotton cloth.
Put the bay berries or leaves to macerate in alcohol, for a month, in a covered glass jar, taking care to stir them a couple of times a week. After the time of maceration, filter the alcohol taking care to crush even the berries and prepare a thick syrup with water and sugar, letting the sugar dissolve in the water over low heat. Once the syrup is ready, let it cool and pour in the alcohol and mix it all together. Pour the liquor thus obtained in an airtight bottle and keep it cool or in the dark for at least 15 days before tasting it.